September 20 is the day !!
Black Burned Blimp will drop their first full length online at, among others, Spotify, Youtube, Bandcamp and Soundcloud.
Together with the bands Lilith, Black Valley, Fuzzboar and Rockford, Black Burned Blimp is going to have a blast on this day in Brigant in Arnhem!

Power rock trio consisting of members from Cape, WhYne and The Exploding Shetland Ponies.
Reviews 2019
“We can talk about it for a long time, but actually every aspect of the band is Rockford stoneware. Think of Red Fang meets Melvins during a Royal Blood concert. Fat sounds are interspersed with subtle breakdowns.” (3voor12 Leiden / Maaike van der Voort)
“Rockford is a band that clearly has its influences from the 90s grunge and early 2000 stoner rock. Think of a mix of Soundgarden and Pearl Jam with Red Fang and Karma To Burn. The three-member band sets a very tight set from start to finish. , that comes across well to the public. “(3voor12 Leiden / Wouter Vermeulen)
“The sound of Rockford is anchored in the nineties towards grunge and the power / stoner rock of Queens Of The Stone Age. Strong performance.” (3voor12 Breda / Daniël Hereijgers)

Fuzzboar is a stoner / psych / heavy rock band hailing from the green fields of Arnhem. They started their musical journey in 2016 and are already punching out gigs like hits from a bong.

“Your soft collision, my molten core
Wipe my blood like you did before
It was my decision to be your whore
Fuck your religion, I’ve got plenty more ”

And there is plenty more where that came from, this is Fuzzboar!

Gelders power trio that has been sharing the stage together for years, but Black Valley is new! In the beginning of 2018 the debut album “Black Valley” was released, named after a very rugged Irish valley.
Boasting rock with a dash of stoner!

I was with Claude at the mortuary and he played this. After I played Super Mario while embalming a body, I came home and bought this. These dirty Dutchmen and their powers from Weed have set up an excellent Stoner riff

Three quirky girls with a healthy dose of punk attitude and a backpack full of music backgrounds. Tessa started writing songs in her room almost ten years ago, Inge is currently studying at the Metal Factory in Eindhoven and this year Maaike is a graduate of the Herman Brood Academy in Utrecht.
Together they form the band Lilith. A band that is inspired by the riot-grrrlmovement from the 90s, but is not afraid of a good pop formula. The songs are catchy, hard and melodic. They describe their style as the love baby from the lesbian relationship between Brody Dalle and Taylor Swift. “Good girls swallow, bad girls spit” is their motto that has been immortalized in two EPs.

Sounding like a speed freaking monster visiting Disneyworld,
Black Burned Blimp combines experimental rock (+ a hint of punk) with the heavy sound of stoner and finish it off with some psychedelics here and there.
The band consists of Eric Broers (vocals and guitar), Arjan Broers (drums), Michaël van der Meer (guitar and keys) and Jurjen van Wingerden (bass).
Black Burned Blimp is not your standard stoner rock band.
Although the basic is rather stoner oriented, it is strongly influenced by pop-like chords, which in turn are supplemented by psychedelic synth sounds
and occasionally almost punk tempo drums.
If you would have bands like Kyuss, Fu Manchu, At the Drive-In, Sungrazer, Faith No More, Radiohead, The Nerve Agents, Queens of the Stone Age and Nirvana raise a child in a morbid way, this one lower let them sing, that child would be called Black Burned Blimp. 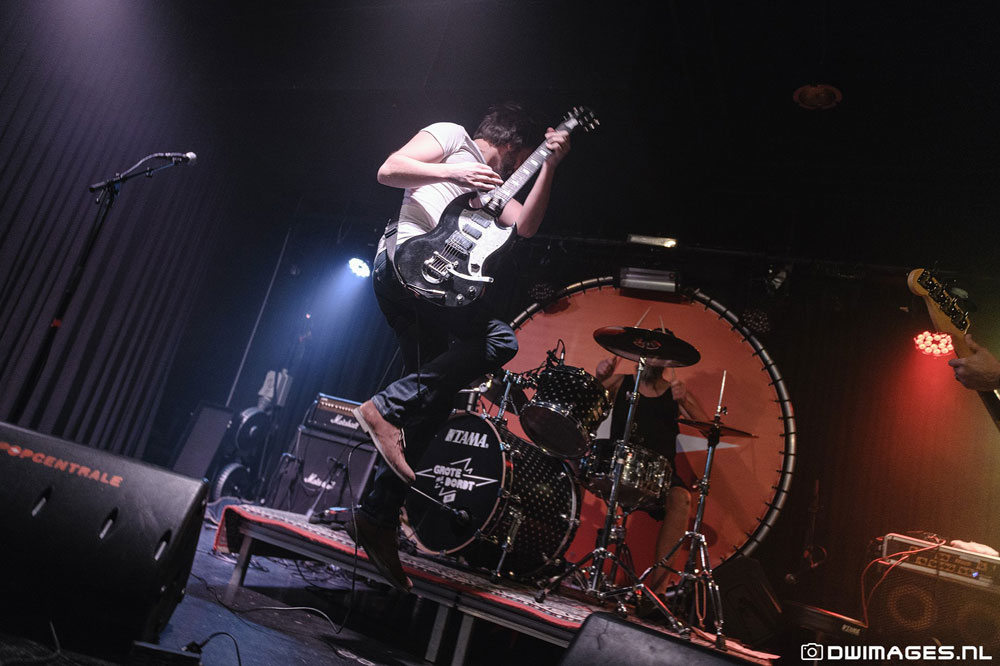